The city was founded around 655BC by the Ionian colonists of the island Andros, while late settlers came from Chalkida.After the Persian wars, Stagira became a member of the Athenian Alliance, contributing to the common fund. During the Peloponnesian war, however,in 424 BC,the city was deserted by Athenians and  allied with Spartans. This caused the rage of Athenians, who rushed to besiege the city but without result.

Later, Stagira joined the confederation of all the cities of Halkidiki by the King of Macedonia, Philip, the second, who destroyed it completely in order to reestablish it himself a few years later on honor of Aristotle.

By this siege and disaster from Philip had already signaled the beginning of the city’s decline, which continued later on.Thus,Straron, the  geographer who lived at the time of Jesus, notices that the area of Stagira already deserted at the time.

A thousand of years later, the existence of a small Medieval castle ‘s parts the remaining of buildings found on top of North Hill ,as well as its Byzantine partitions.

In classical times, Stagira had the name”Orthagoria”but information has it that this view is mistaken, because there was another city with the same name in Maronia of Thrace. 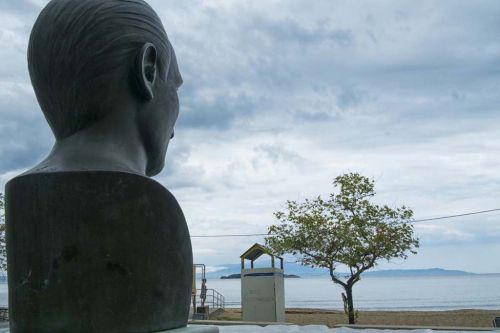